Part 3: Deja Vu: The Return of the Hard Market

The medical professional liability (MPL) insurance market is surprisingly easy to forecast.  Pricing policies remains a challenge, as premium coming in today is used to cover losses often years down the road.  But it doesn’t take an expert to look at the following graph and figure out where things are headed. The question for physicians is simply: how do they protect themselves? 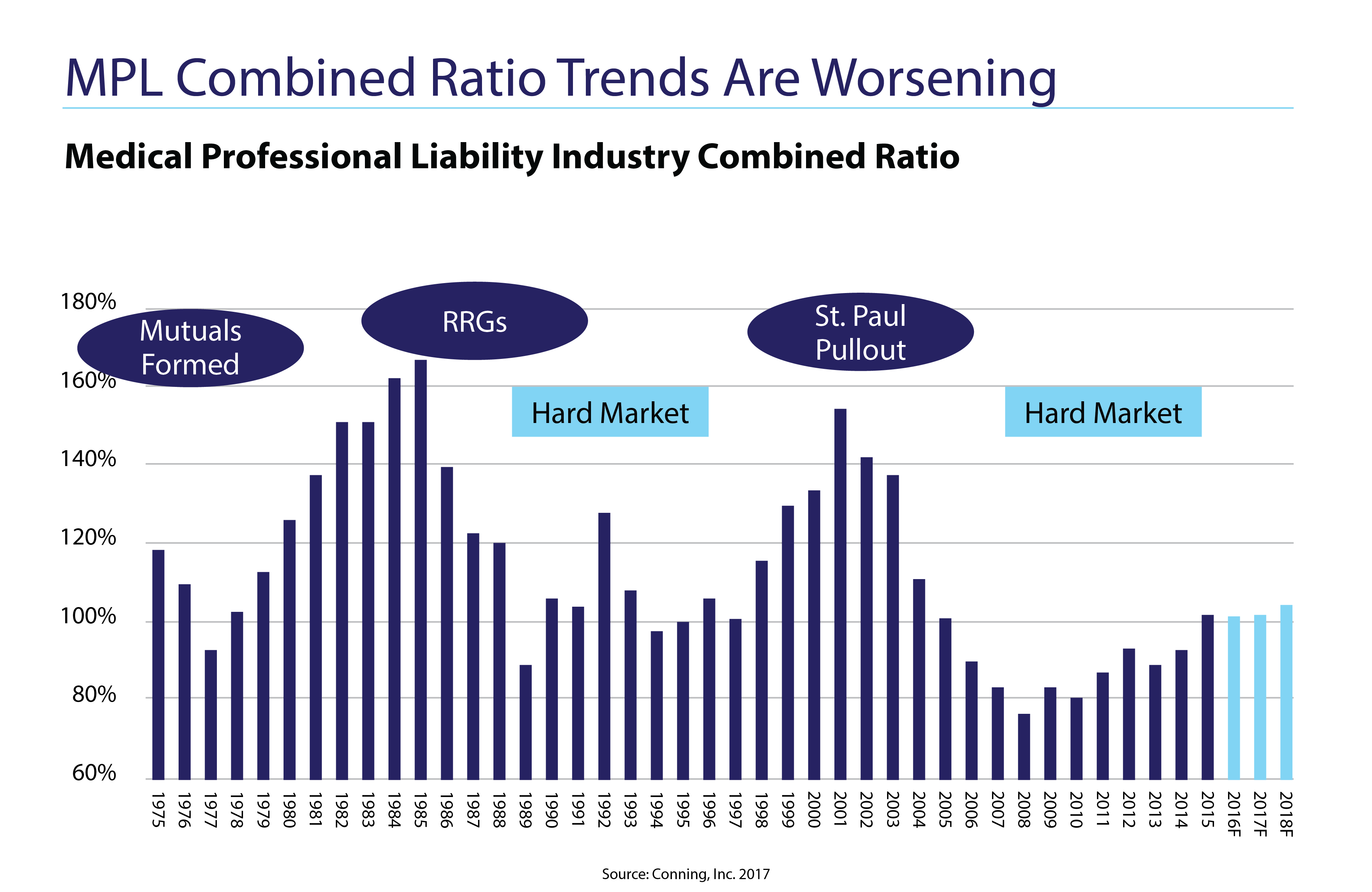 “Combined ratio” is a measure of an insurance company’s profitability expressed in terms of the ratio of total costs divided by total revenue.

An Even Briefer History

The turn of the century marked one of the worst hard markets (and thus the worst MPL crises) in history.  Company after company went out of business, and the survivors drastically increased rates. Thousands of physicians across the US suffered.

Countless new companies emerged marketing every new distinguishing feature imaginable: “No brokers,” “Control your own destiny,” “Binding arbitration,” “Claims Made Only,” “Claims-Paid Only,”

The reality is that none of these features matter, because the primary way to “grow” was (and is) to charge less than the competition.  When policies are consistently underpriced, it is just a matter of time before a company can no longer meet its financial obligation to physicians.

Prudent MPL companies come in many forms.  There are several companies with balance sheets so strong that they can weather this market cycle. Some smaller companies grew responsibly, and through hard work and underwriting discipline remain profitable.  Others grew responsibly, but struggled to compete in the soft market, so sold at the right time to benefit policy holders.

Reckless insurers also come in many forms.  Most believe that they can continue underpricing policies – right up until regulators force them into runoff.  Others reposition themselves as “brokers” in last ditch efforts to get paid for the very physicians they failed.  In a few extreme cases, management cashed out by brokering their own members’ policies to other companies, even as the underlying company headed towards bankruptcy – without accountability (unfortunately, these extreme cases will likely continue until directors and owners are held accountable).

Note: Since publishing “Part 2” of this series another company was forced into rehabilitation:

A deeper examination involves reviewing historical reserving practices. Companies that do not initially set aside (“reserve”) enough money to pay claims must consistently use new money to do so – rather than using the money to meet future needs.  Such “cash flow underwriting” companies are typically the early casualties of a hard market.

Another revealing analysis compares a review of year-over-year surplus.  Any company consistently losing surplus when a market hardens is vulnerable to financial difficulty.  In one extreme case, a NJ company has seen its surplus drop from roughly $15,325,000 at year end 2014, to under $5,000,000 at the end of the third quarter in 2019.

Preventing the Next Crisis

Any physician who has gotten sued for an incident that was supposed to be covered by a defunct company understands the financial and emotional toll.  Unfortunately, more government action is likely necessary to prevent the next crisis. Regulators: Regulators often wait too long to intervene when companies are struggling.  The delay can be attributed to several factors ranging from a lack of resources, political pressure or just a lack of

authority under state regulations.  State insurance departments need to be given better tools to prevent MPL market swings, which can have a devastating impact on the lives of physicians.

Bracing for the Hard Market

Entering 2020, several of the nation’s leading MPL carriers have announced rate increases. While macro forces have and will move the market broadly, individual medical practices can take proactive steps to help mitigate their respective premium escalation.

Insure with a financially sound company, today.  As outlined above, MPL market cycles can be severe. The financial health of each insurance carrier must be thoroughly analyzed by looking at past performance, financial ratings and trends. Physicians need to retain trusted advisors to help them navigate their insurance contracts as well as the overall financial strength of their insurer.  Once regulators finally take over a company, it is too late. And the longer physicians insure with what becomes an insolvent company, the worse the damage.

Despite the rising rate environment, supply and demand still plays a role in pricing.  Physician practices should ensure that all carriers in a respective market ‘bid’ on their business. Obtaining numerous quotes through a broker with comprehensive market access enhances negotiating power, which often leads to lower premiums.

Risk Management: Negotiating rates based only on premium size is more difficult in hard markets.  Regardless of how much premium a group pays, if the losses are expected to be more than the premiums, it is still a losing proposition for insurance companies.  Groups that can demonstrate that they are better risks than their colleagues of a similar specialty mix have a much stronger argument. The key is being able to demonstrate why they are better risks.

Forecasting a hard market isn’t difficult; preventing it is.  Time will tell whether this hard market becomes a crisis – for thousands of physicians, or just a few who waited too long to act.

What We Do
Our Team
Who We Serve
Quick Quote